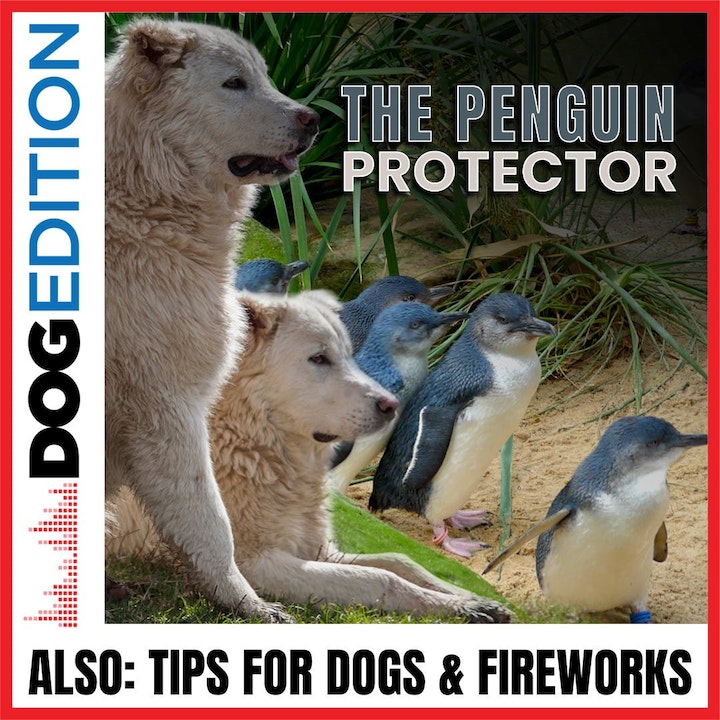 Dogs protect Little Penguins on an Australian island. Then, how to protect dogs from fireworks.

The Maremma guardian dog has been guarding livestock for centuries in the Old World ... and now protects Little Penguins on an Australian island. And as America prepares for the 245th Fourth of July celebration, we should also prepare our dogs.

The Little Penguin is the tiniest of flightless swimmers ... just a foot tall, and a beautiful fairy blue. On Middle Island, just off the coast of Australia, the local foxes terrorize the teensy birds during breeding season ... at least, they used to. From an original colony of 502 birds, by 2005 there were only 10 Little Penguins left on the island.

A clever chicken farmer suggested using Maremma sheepdogs to guard the birds -- and it worked. Within a few years, the colony was growing in number in the watchful care of the large white Italian dogs.

The program is so successful that they are now thinking of using it to protect bandicoots.

This Old World breed has a long history of guarding flocks and loving work. No wonder we turn to them now as the perfect symbol of awareness and conservation.

Humans have celebrated military victories with fireworks for centuries. Meanwhile, the whistles and bangs and blinding technicolor pyrotechnics have driven dogs nuts.

They don't experience fun ... they suffer, and too often, run scared. The number of dogs who go missing zooms higher on occasions marked by fireworks.

This weekend is the Fourth of July in the United States, and dogs will have to tolerate the intolerable. How can we help them?

We talk to folks with firsthand knowledge about how to help dogs handle the "celebration."

Jim, Pam, and Caroline stop by the hydrant to sniff out the latest dog gossip, innuendo, jokes, and notes.

Linda Van Bommel is a livestock guardian dog expert from the University of Tasmania in Australia. She is a wildlife ecologist, primarily interested in wildlife conservation and non-lethal predator management.

Patricia Corbett is the Middle Island Maremma Project coordinator. She teaches about marine ecology, marine and coastal ecosystems, and human impacts on the marine environment at Deakin University in Australia.

The Middle Island Maremma Project began in 2006 when fox predation resulted in a sharp decline in the size of the colony of Little Penguins on Middle Island. The large white sheepdogs were first trained to protect the penguins some years ago, in a world first trial. Two of the dogs have been credited with saving the endangered colony, bringing it back from the brink.

As the owner and primary clinician for the Animal Behavior Clinic, Dr. Christopher Pacel combines learning theory, medical training, and experience along with compassion and effective communication to create a balanced treatment plan that is tailored to the individual patient’s needs. Dr. Pachel’s methodology emphasizes the importance of the human animal bond and the role that companion animals play in the lives of their families.

Kristina Crowley is a podcaster and blogger at WagWoofLove. She brings her countless experiences and knowledge over many years of being a pet owner and sitter to help her audiences.

Dr Patricia Corbett is the Middle Island Penguin Project coordinator and educates the public about the world first conservation project. She is also a Teaching Scholar - Marine Environmental Science, Course Director of Bachelor of Environmental Science at Deakin University.

Linda Van Bommel is a Livestock Guardian Dog expert with University of Tasmania, Australia. She is also a wildlife ecologist, primarily interested in wildlife conservation and non-lethal predator management.

She has been a postdoctoral researcher at UTAS since 2016, where she works on a project trialling the use of Maremma sheepdogs to protect re-introduced Eastern Barred Bandicoots from fox and cat predation. Prior to her current position she completed her PhD, studying the use of livestock guardian dogs in Australia.

Here’s What We Found at The Hydrant